Control Max, a young inventor, and Monica, a warrior princess from the future, as they fight their way through dungeons and train rides to save the world.
PlayStation 2 PlayStation 4

Dark Cloud 2, also known as Dark Chronicle, was developed by Level-5 and published by Sony. Just like its predecessor Dark Cloud, the game is a randomly-generated dungeon crawler with town building and weapon synthesis mechanics. New to the series is time-travel. The majority of the game is set in the past, where the player will have to meet certain conditions in order to restore the future to what it once was.

The difference between the first game is that if the player's weapon broke it was gone forever. This is not the case in the sequel, and now the player only loses experience. The player collects ABS points to level up their weapon improving their attack power and synthesis points. These are then used to merge with synth spheres to gain extra abilities. Weapon abilities include Attack, Flame, Lightning, Smash, Beast, Durable, Chill, Exorcism, Cyclone, and Scale. When all abilities have been met, players can build up their weapon, increasing its effectiveness while also altering its appearance.

As the story unfolds, Max and Monica gain more powerful weapons and abilities to aid them on their quest. New gameplay features that are introduced into the franchise are the ability to change or transform into a secondary character that can be used in dungeons. Max, as an inventor, brings his robot called Ridepod, a slow but formidable fire and defensive power. Ridepod can be upgraded by customizing different body parts from shops or inventing your own. Monica has the ability to transform into monsters, obtaining their special attack and the use of communicating with the same breed. Townsfolk can be brought to assist in dungeons as well. While they are not controlled directly, they offer items and abilities.

Though the game is primarlily focused on combat there is also a building aspect, as in the first Dark Cloud. The purpose of searching the dungeons is to gain Geostones. These Geostones are plans that are used to make houses, trees, fences, pots, benches and more. The player collects materials to construct these obtained plans, which is called the Georama system. Players can place their creations anywhere on the field, but the story will not develop if certain conditions aren't met. The purpose of re-building a town is to restore the future to what it once was.

New to the series is the introduction of Spheda. Similar to golf, the player uses a Spheda Rod to hit shards of space-time known as spheres back into the Time Distortion. Time Distortions and Spheres are either colored red or blue. The same colors repel each other, so a blue colored sphere will not go into a blue distortion. To change the color of the sphere, the player can hit it against the ground or walls to change the color.

The Ridepod (A.K.A "Steve) is "played character" that can be utilized by Max early in the game. The Ridepod is fully customizable, able to change the weapons, the way the Ridepod actually gets around (I.E. you can change the legs out for track) you will need to invent these upgrades yourself, or buy them from Cedric. The Ridepod is used against certain bosses, along with some heavier trash that appear in dungeons. 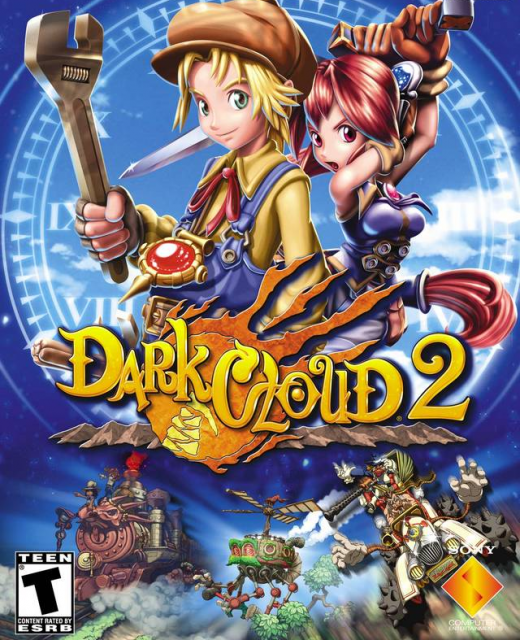