Eternal Sonata, also known as Trusty Bell: Chopin's Dream in Japan, is a unique role-playing game by tri-Crescendo. The game is highly influenced by the music of Frédéric Chopin, who passed away of tuberculosis at the age of 39. It is set primarily within a dream Chopin experiences while asleep on his deathbed, though some scenes also take place in the real world.

Events of Eternal Sonata's story are loosely inspired by events in Chopin's life and the music he composed; the game pauses between chapters to divulge biographical information about Chopin's real life and what drove him to compose some of his most famous works, some of which are included on the soundtrack as played by pianist Stanislav Bunin. The game's original score was composed by Motoi Sakuraba. Many of the game's characters and locations are likewise named for musical instruments, genres, or concepts.

The game was originally released for the Xbox 360. Tri-Crescendo worked on a Playstation 3 version of the game which includes new content, characters and features. The PS3 version made its debut on October 21,2008.

The game takes place outside and inside a dream world which is divided into chapters, each one based upon Chopin's most famous works such as 'Raindrops' or 'Revolution'. As Chopin rests during his final hours on his deathbed, the player is taken on a journey through his dreams which resemble the life of Chopin in a fictional manner. Each chapter is accompanied with a melody and historical information about his difficult life which gives insight on the development of the storyline.

The fictional world inside his dreams is a world at war between two kingdoms, Forte and Baroque. Polka, a young girl that resides in Tenuto (a village within Forte territory), has a terminal illness; a side effect of her ability to use magic, which keeps her from being around normal people as they fear becoming infected. Her condition also makes it hard to make a living selling floral powder, a healing agent, as she is avoided in town. Business is made even harder for her with the rise of "Mineral Powder", a much more effective and addictive miracle cure supplied by Forte Castle. Even though her mother tries to support her as much as she can, being the only person who wants to be close to her, Polka leads a lonely and difficult life. On a beautiful night near the cliffs of the town, Polka meets Frédéric Chopin who offers to help her on a journey to meet Count Waltz, the ruler of Forte, so she can plead to increase the price of the currently cheap mineral powder throughout the kingdom.

At the same time two young orphan brothers, Allegretto and Beat, struggle to survive in town by stealing bread. After one of their thefts almost goes wrong, they travel to Count Waltz to plead for lower taxes in town so that they can feed the other orphan children. During their journey, Allegretto and Polka run into each other and feel a strange connection between them. While traveling through the forest, they encounter small magical creatures called "agogos" that shy from most human contact, yet they react differently around Polka.

As the party finally arrives at castle Forte they are ignored by Count Waltz and are quickly thrown in jail. It's also revealed that Count Waltz is trying to use the agogos for experimental purposes. With the help of an underground resistance group that plans to overthrow Count Waltz in a mission for Prince Crescendo, ruler of Baroque, they make their escape and travel to Baroque to inform the prince of recent events. At Baroque Castle, the party learns that the mineral powder supplied by Count Waltz is highly dangerous and addictive, with the ability to turn the citizens into soldiers to attack Baroque. While Polka and Allegretto are standing by the cliff at the sea, Polka throws her rock, given to her by a "special someone", out into the sea. Surprisingly, Allegretto gives her an identical rock to replace the one she just lost.

After the party learns that Forte has a spy placed in Baroque, Prince Crescendo decides to surrender himself to prevent any bloodshed. Thankfully the party manages to stop the prince before he reaches Forte territory but discover that Count Waltz has already started to attack Baroque. The party manages to defeat Count Waltz and prevent an invasion into Baroque but they fail to stop his advisor, Legato, from using a new and experimental mineral powder on himself. The new powder transforms him into a huge demonic creature that creates a gateway into another dimension.

The party follows Legato through the gateway and find themselves in a new world occupied by the very souls who died from using the mineral powder. As they track down and defeat Legato, they gain access to the core of the dream world. Frédéric Chopin is still certain that all of this is just a dream during his final hours and believes he has to face his own soul before he can pass into the afterlife. Doing so, he attacks the party but faces defeat.

After these events, Polka feels that this also marks the end of her journey. She thanks everyone for the kind friendship and throws herself from the cliff, as she did with the rock. Allegretto is struck by sadness and fury because of this and blames Chopin for her death. In a following sequence, a younger and reborn Polka falls from the sky into the arms of her mother, who seems to know that all of this was going to happen. This scene mirrors the intro sequence of the game, which portrays the younger Polka alongside her mom walking through a field of flowers narrated by Chopin. Polka can hear someone calling out to her, while her mom explains that this person is her "special someone". Polka bids farewell to her mother and is taken away by the glowing agogos.

After this sequence, Polka returns back to her party and is carried back up the cliff by the agogos. She realizes now that she is reunited with her "special someone", her true love, and embraces Allegretto. Back in the real world, we see Chopin's spirit rising from his body. Amidst a sea of flowers he sits by his piano one last time, playing "Heaven's Mirror" inspired by Polka.

Eternal Sonata has many kinds of enemies roaming the world you can explore. The player can choose to run up to the enemy to commence combat, or run up from behind to start a back attack. The back attack allows the party to attack first with additional damage. While the game has several characters to play with, you can only have three active characters in battle. This allows players to find the characters they are most comfortable playing with, or switch characters depending on the tactics or effectiveness of battle. Each character has either a melee attack or a combination of both ranged and melee with up to four additional special moves, two light and two dark attacks. As the battlefield is often divided in areas filled with light or darkness, the player can only use a light or dark attack in the corresponding area. By repeatedly attacking an enemy, players can fill up their 'Echo Meter' and increase the multiplier which goes from 8x, 16x, 24x up to 32x. When the Echo multiplier increases, more damage can be done using special moves. Once the multiplier is at 24x or 32x, 'Harmony Attacks' or also known as chain attacks can be executed.

Since the game doesn't have a difficulty setting, the party level can be increased throughout the game. Higher party levels change the rules of combat; lowering the turn time, lowering the tactical time, increasing the overall speed of combat or allowing Harmony Attacks to be used. While a higher party level makes combat more challenging, it also allows players to use more advanced tactics. Party level 6, the highest level obtainable can only be unlocked in Encore Mode.

As in most Japanese role-playing games, Eternal Sonata features an 'Encore Mode' or commonly known as 'New Game Plus'. Only after the player has completed the game, the Encore Mode will be unlocked. The game does this by marking a new save game with a medal (which one of the characters will wear during Encore Mode). While player levels won't be carried over, party levels, score pieces and EZI artifacts will. To increase the challenge, all the enemies will be 1½ times stronger and have HP to match. Some of the EZI artifacts can only be found during the Encore Mode, which makes it a required play through to unlock all achievements available in Eternal Sonata.

A manga adaptation was made and published by Dengeki Comics which is illustrated by Kuroi Memei.

As Eternal Sonata is heavily inspired on the life of a famous musician, the soundtrack is very extensive. One album was included with the Japanese Eternal Sonata Xbox 360 bundle, which features 20 of the best tracks used in the game. A soundtrack compilation was later on 25 July 2007 released in Japan under the King Records label named Trusty Bell: Chopin's Dream Original Score, which includes four albums with every track used in Eternal Sonata. Most of the tracks are composed by Motoi Sakuraba, some original songs by Chopin are also used performed by Stanislav Bunin, these include Étude Op. 10, No. 12, Étude Op. 10, No. 3 and Polonaise Op. 53.

A soundtrack was included with the Japanese Eternal Sonata Xbox 360 bundle, which features 20 of the best tracks used in the game composed by Motoi Sakuraba.

06 - Underground For The Underhanded (Ritardando Sewers)

07 - Mediocrity For All (Ritardando)

11 - Between Light And Darkness (Boss Battle 3)

Eternal Sonata requires 6.8GB of free space to be installed on a Xbox 360. 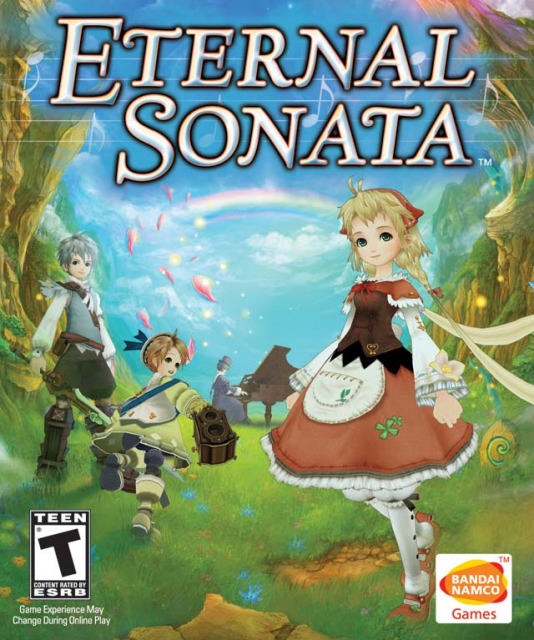