Professor Layton and the Curious Village

Professor Layton and the Curious Village is a point and click adventure puzzle game set in a charming village with enigmatic characters. Solve over 120 puzzles given to you by the villagers to help you solve the mystery of the 'Golden Apple'.
Nintendo DS

Professor Layton is an adventure game set in the fictional town of St. Mystere. The main protagonist is Professor Layton who has a predilection for solving puzzles. The Professor’s reputation precedes him as it is clear from the beginning that he has the dubious honor of being famous for solving puzzles. The game begins with the Professor driving to St. Mystere with his apprentice Luke. The Widow of the late Baron Reinhold - The Lady Dahlia of St. Mystere, has requested the help of the well known Professor to search for the ‘Golden Apple’, which her late husband hid in the village before his death. The finder of the prize will inherit his entire fortune.

By some cosmic co-incidence the entire of town of is obsessed with solving puzzles and so the Professor and Luke fit right in and proceed to solve the numerous puzzles that the inhabitants of the town pose to them. The visitors notice that St. Mystere is under the shadow of a huge tower that no one has visited and can’t even get to. The tower proves to be important to the plot later on and the inhabitants seem to be concerned about noises coming from it. During his search for the Golden Apple, Professor Layton gets involved in a murder investigation, a search for a missing cat, and somewhat predictably, uncovers the mystery behind the tower.

St. Mystere has an old European village vibe about it full of charming architecture, small unevenly paved streets, and cleverly hand drawn archetypal characters. The accordion music adds a Parisian feel to the village and the characters costumes have a French peasant fashion that gives an impression of simple easy-going yokels.

The game can be played by using the stylus exclusively. The player directs the Professor and Luke around the village by tapping a shoe icon in the bottom right of the screen that presents the player with movement options. Once a movement direction is chosen, Layton and Luke move to the corresponding scene. New locations within St Mystere are unlocked as puzzles are solved and the plot progresses.

Puzzles are uncovered by tapping on objects in the world and characters. The puzzles vary in difficulty and generally get harder as the game progresses. Some puzzles will be familiar to players such as having to move two match sticks to make a different representation of an object. Other puzzles will require you to do a little calculation or to work out which of four people is lying. Most puzzles have a simple solution and when a puzzle may look like you need to perform complicated equations you have usually just not really thought about what the puzzle is asking you.

Hint coints are hidden throughout the village and can be found by tapping the appropriate location. The hint coins can be spent to unlock hints for solving a particular puzzle. Puzzles answered incorrectly can be retried for a reduce score in a currency called "Piccarats". Solving puzzles continue sthe story and may reward you with 3 different types of items. Gizmos will eventually help you build a dog that will sniff out hint coins. Pieces of a painting will help you assemble a picture like a jigsaw puzzle, and furniture will help you kit out Luke and the Professors hotel room. All the solved puzzles are held in a puzzle index so the player can return to them if they wish. You don’t necessarily need to solve all the puzzles and any unsolved ones are kept together at Grannie Riddleton's Shack. A minimum of 75 puzzles need to be solved to enter the tower and solve the Mysteries of St. Mystere identified throughout the story arc.

Professor Layton and the Curious Village also offered the promise of additional exclusive downloadable puzzles off of Nintendo's Wi-Fi service. Once a week a new puzzle would be released free of charge. A slight controversy surrounded these offerings as it was later discovered that the puzzles were not being downloaded, but were already on the cartridge and were instead merely being unlocked.

Slight differences exist in puzzles between the U.S. and U.K versions of the game. Most of these revisions were in regards to slang and vocabulary but a few specific puzzles are only found on each version. The U.K. version also had a total of 27 downloadable puzzles, while the U.S. only had 26. Both are also significantly different from the Japanese version, which featured a not insignificant number of puzzles that use Japanese wordplay or require knowledge of kanji. All of them were replaced for the western editions. 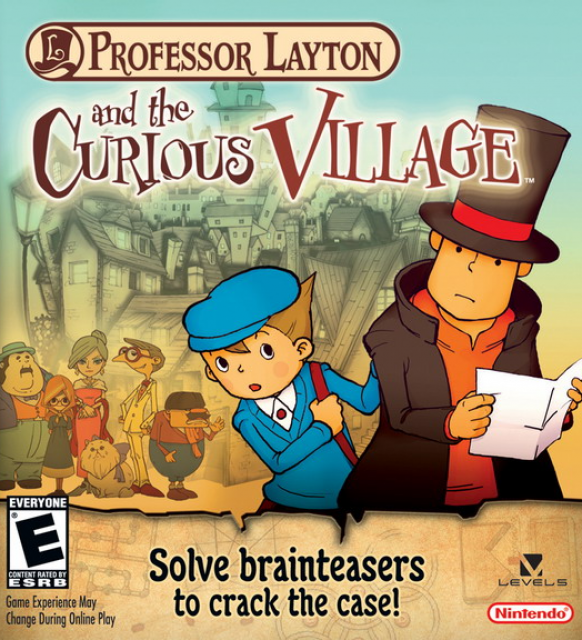