The third entry in EA Sports's long-running licensed soccer series. Features two distinct versions depending on whether the player has a 16-bit system or a 32-bit system.

FIFA Soccer 96 is the third game in EA Sports's FIFA Soccer series of soccer sims and was released on many systems in late 1995.

The 16-bit version, available for SNES, Genesis, Game Gear and Game Boy, used the series' trademark isometric 2D perspective of the pitch and pre-rendered 3D sprites for its players. For the 32-bit version, available for Sony PlayStation, Saturn and PC, the game uses rudimentary 3D graphics and a camera view that could be twisted around to catch the soccer action at any angle.

The game increases the complexity of the ball control and updates the rosters for the 95/96 soccer teams around the world. It contains a vast number of national sides and international league teams, and their players. 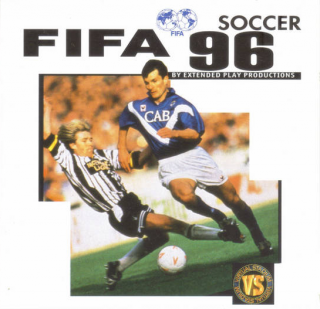