Real-world players combined with an expansive commentary engine to create the most involving football simulation yet seen.

The videogame series responsible for more poor European college grades than any other got serious for the first time in Championship Manager '93.

Outside of the Eastenders reject greasily pointing at you from the front cover,  '93 represented the series' most comprehensive title yet, combining much-needed improvements to the commentary system with the inaugural inclusion of real-world player data. The result was an English football simulation the likes of which had never been seen, with the expanded commentary managing to recreate that Saturday feeling with aplomb. The key ingredients were in place for the first time and Championship Manager took off from here.

93/94 was an add-on disk that updated stats to reflect the end of season transfers, offering up precious little in the way of gameplay alterations and a couple of extra background images. Nevertheless, it was considered an essential purchase by fans at the time, kickstarting a yearly release tradition that follows the series to this day. 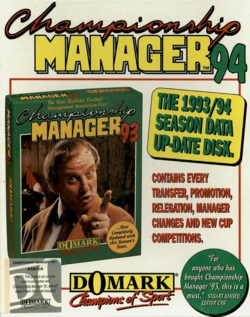