LMA Manager is the first game in the LMA Manager franchise. It was released in 1999 on the PlayStation

Where as most football management games were made for the PC in mind, LMA Manager was built for the ground up for the original PlayStation. PC football management sims used a "Point 'n' Click" control concept. This did not adapt well to the PlayStation especially since the original Dual Shock was not widely avalible and as such there were many analouge controllers to use the Point and Click  style controls. So the game used a system of tabs. There were several main tabs the player could travel to using the L2 and R2 buttons (for example, moving from the transfers tab to the main squad tab). When said tabs are selected, a number a sub screens will appear and you can navigate these by using the L1 and R1 buttons (for example, in the main squad tab you can move from the squad selection, to the injuries, to the youth team and so on). These solved the problem of the lack of the Point and Click feature. The game was well recieved for its intuitive control scheme and was one of the big and popular features of the game which went on to start a annual franchise.

In LMA Manager only the English leagues are playable, unlike the later games which lets you play with teams around Europe. Here are the playable leagues:

LMA Manager was a hit. Its use of custom controls on a home console was never seen before. Its ease of use made it very accesible to football fans, who may have found other football management games too hardcore and complicated. The game was also noted for its cheats which made the game unrealistic but still very enjoyable. The game's 3D match engine and control system contributed to it;s critical acclaim. It was scored a 9/10 of the UK's Official PlayStation Magazine. Its use of licensed material was a new thing to the genre as well. Most management games, at that time, had non-licensed players who had made-up names. LMA Manager had all the big players of the '99/00 season in it and fully licensed. The game was so sucessful that it earned a sequel, named LMA Manager 2001 which was released a year later. LMA Manager set the bar for console football management games. 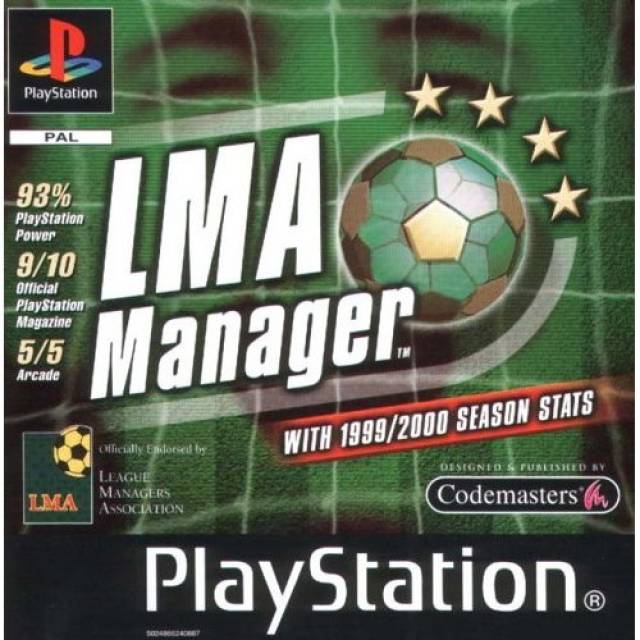