Dungeon Siege II is a role-playing game for the PC. It is the sequel to 2002's popular Dungeon Siege, developed by Gas Powered Games and released August 16, 2005. An expansion, called "Broken World", was released the following year.

Dungeon Siege II is the direct followup to the popular 2002 action RPG dungeon crawler Dungeon Siege, developed by Gas Powered Games and Total Annihilation developer Chris Taylor. It showcases a variety of new features that improve upon the original mechanics.

It was released in August, 2005, after a year of delays. A year later, the expansion pack, titled "Broken World" was released.

Like its predecessor, Dungeon Siege 2 features similar gameplay to Blizzard's Diablo 2, but follows a more linear path of progression.

GPG addressed several complaints of the first game: an absence of a proper story, gameplay that was too linear and devoid of depth in the RPG elements and upgrading, aiming to create a deeper, more enjoyable game.

The gameplay and basic mechanics are basically the same as they were in the original Dungeon Siege, but with a few key improvements: for example, you now have to hold or repeatedly click the right mouse button or instead of doing it once and watching the battle play out from there.There is also a new skill tree system in place, similar to the one found in Diablo 2. The player can choose which skills to gain or upgrade and can do so to those skills any number of times. New skills are unlocked as the player progresses through the game. The player can also acquire new Hero Powers that are unlocked after a certain combination of skill levels is reached, providing a more diverse gameplay experience then the original Dungeon Siege.

Dungeon Siege II retains the class system from the original: instead of choosing a class at the beginning of the game, the player's class is determined by his play-style throughout it. If a player uses Combat magic at the start of the game then they will level up in that and gradually become a Combat Mage, the other attributes soon becoming mostly useless or obsolete. The four classes, as in the original, are:

It is now possible to specialize within a class. A Melee type can choose to level up Duel Wielding instead of Two Handed Weapons, or Sword and Shield. Likewise, a mage can focus on Ice powers instead of Fire powers. These choices eventually reflect upon the character's gear and Hero Powers.

It is still possible to become a jack-of-all-trades, but the game recommends against it, as those who attempt to do so typically become severely underpowered before long. The Player can have three party members join him over the course of the game, including other people the player meets in their travels, pets, and pack mules.

A new feature to Dungeon Siege II is the ability to choose a different race at the beginning of the game. The races are:

The game also has multiplayer co-op support for another five people, who may have their own henchmen if they choose.

Dungeon Siege II takes place in the Kingdom of Ehb and begins with the retelling of the "Great Cataclysm", when the Sword of Zamaroth and the Shield of Azunai (both thought to be infinitely powerful) clashed for the first time. This event effectively ended the First Age. Out of this catastrophe rose a powerful prince, Valdis, and his powerful army of Morden. Valdis is bent on recovering the Sword of Zamaroth and joining the Dark Wizards.

The game begins with you, the main character, and your friend Drevin landing on a beach as soldiers for hire in Valdis' army. By the end of this initial tutorial quest you are betrayed by Valdis, Drevin is killed in the conflict and you are knocked unconscious. You awaken in a jail cell in the treetop city of Eirulan, a Dryad outpost. From here, the main quest begins, as you search for Valdis to stop him from wreaking havoc with the Sword of Zamaroth.

'Broken World' was released on August 22nd, 2006. It featured an additional act for the campaign, taking place immediately after the events of Dungeon Siege 2. Alongside it were dozens of new monsters, numerous items, and new pets. Notably, it introduced two new classes, both being hybrids of combat and magic. Skills and powers were added to supplement them. Finally, as per fan request, included was a new race, the Dwarves, who were in the first Dungeon Siege.

In terms of gameplay, there were few changes, the most prominent of which was the inclusion of a crafting system, allowing the player to create enchanted items. 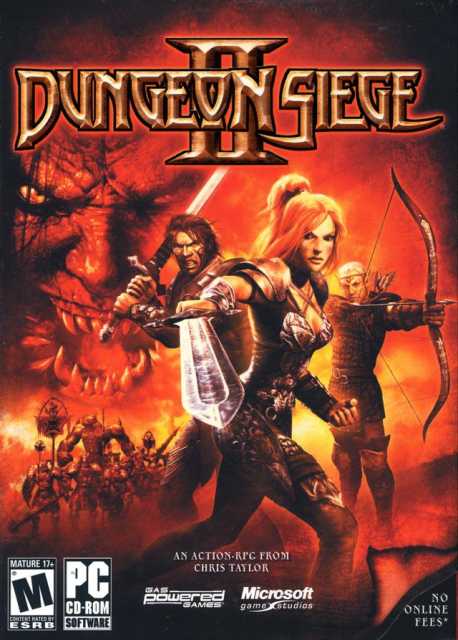