Defend the human race from nefarious aliens in this downloadable dual-joystick shooter from Capcom, based on the Rocketmen game by WizKids.
Xbox 360 Games Store PlayStation Network (PS3)

Rocketmen: Axis of Evil is a top down, dual stick shooter that was developed by A.C.R.O.N.Y.M, and was released on Xbox Live on March 5th of 2008, and March 6th on PSN. The game is based around a treaty between The Legion of Terra and Mars, and the planets Mercury, Venus, and Earth, which form the Alliance of Free Planets. Though during the creation of this treaty, the leader of the gets kidnapped by the Axis of Evil, and you have to save him. During the story line, you travel to different planets and space stations around the galaxy, searching for the leader, and trying to save the day.

The game allows you to choose between three different races of creatures, Human, Mercurian, and Venusian, as well as allowing you to choose between three different classes of characters, Engineer, Warrior, and Outcast. The game allows you then though to create your character as you please, giving you numerous skin colors, and genders to choose from. Though following the creation of your character, the game follows a linear based gameplay. You continue on a set path from Planet to Planet, or sometimes to a Space Station, where you use the left thumb stick to move, and the right thumb stick to shoot.

Rocketmen: Axis of Evil also has some RPG elements thrown in, with the usual, gain experience through killing numerous enemies, and leveling up you abilities. Though one of the unique things about Rocketmen is the way your weapons function. Instead of using a set number of bullets for each gun, you have a certain time limit that you are able to use it for. Once the time has run out, you have to pick up another weapon. The game also has a different variation of some usual guns; including pistol, shotgun, and then some other guns with a sci-fi twist added. For example, the, ‘Razor,’ is the usual machine gun, but instead of firing bullets, it fires saw blades, that will reflect off of the walls, or the Vulcan that will fire two sets of bullets, instead of one. You also have some other weapons at your disposal including rockets and mines. The game also supports two to four player co-op, that is both online, and offline enabled.

Though the game sold ok, critics were not so favorable to it. Jeff Gertsmann gave the Rocketmen: Axis of Evil, two stars out of five, and other sites such as Gamespot gave the game 6.0 out of 10.

Rocketmen: Axis of Evil Review
Wolf of the Battlefield: Commando 3 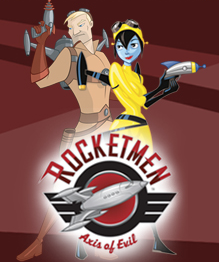