American McGee's Alice is a pseudo-sequel to Lewis Carroll's classic. Alice, scarred by a horrific childhood trauma, must return to a dark, nightmarish version of Wonderland. Alice must restore its former harmony by defeating the Queen of Hearts in order to vanquish her own inner demons.

American McGee's Alice is a third-person action and platforming game, styled as a darker sequel to "Alice's Adventures in Wonderland" and "Through the Looking Glass". The game uses a heavily modified version of the Quake III: Arena engine.

The game is set ten years after Alice's previous adventures in Lewis Carroll's Story, "Alice's Adventures in Wonderland", with players taking the role of Alice. In the opening cinematic, Alice's house is burnt down by an accidental fire, killing her parents. As a result of her survivor's guilt, Alice attempts to commit suicide and is sent to the Rutledge Asylum. After years of unhelpful counselling, Alice is near catatonic until the White Rabbit summons Alice to aid a radically altered Wonderland, now under the tyrannical rule of the Queen of Hearts. The Cheshire Cat serves as Alice's companion through the entire game, frequently appearing to guide her with cryptic riddles.

Various famous characters from the books of "Alice's Adventures in Wonderland" and "Through the Looking Glass" make appearances in the game such as:

All of these characters have however been horrifically twisted or reconstructed.

Combat takes place from a third person perspective, with various items related to Alice's journeys acting as weapons. A deck of cards serve as a weak projectile type weapon, whilst a Jack-In-The-Box serves as a makeshift grenade. All weapons have a differentiated second function, often acting in new and different ways to the original function (i.e. Throwing Alice's Vorpal Blade, launching a barrage of cards at once). The varying effects of each weapon and its sub-function add a degree of depth and difficulty to combat. Other weapons include demon dice, a blunderbuss and the Jabberwock eye staff.

Toys are what Alice uses to combat the malevolent forces of the Queen of Hearts; most have two distinct methods of operation, the ones that don't activate their primary fire when you push the alt fire button.

The soundtrack for American McGee's Alice was composed by the musician Chris Vrenna. 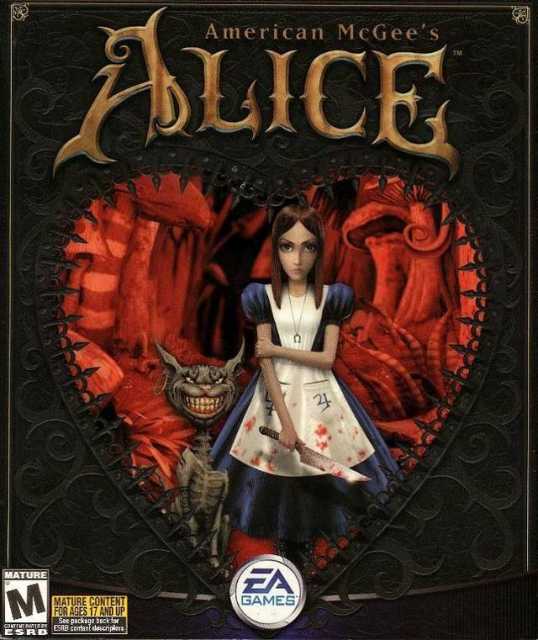