The 12.3th game in the Touhou Project, and the third addition to the fighting games on the series. Also called Touhou Hisoutensoku, the game is an expansion to the previous entry in the genre, Touhou Hisouten. The expansion adds new characters, more spellcards, tweaked sprites, fighting system, and more.

A peculiar sight can be seen in the distance: a mysterious dark giant is wandering around Gensokyo. It has the ability to suddenly appear and vanish without a trace. The denizens that see this become curious as to what this strange visage might be. Among them, three girls, Sanae Kochiya, Cirno and Hong Meiling have especially strong theories and fears as to what the giant is: Sanae seems to think the figure is a giant robot as described in an old anime, Cirno thinks it to be the great Youkai Daidarabocchi, which she believes, if dominated, will make others her more seriously, and Hong Meiling believes the shadow to be the Buddha of Misfortune, "Taisuei Shengjun", an evil god that came to pass judgement on the denizens of Gensokyo.

They each set out, and their adventures take them through many trials, ever closer to unveiling the true identity of the black behemoth.

Touhou Hisoutensoku is the 12.3th game in the Touhou Project, released for the Windows OS in the April 14th 2008. The game is a collaboration between ZUN and Twilight Frontier, which also made most of the assets and work on previous fighting game entries on the series. The game introduces four extra characters that made previous appearances in other Danmaku games in the series, bringing the original roster up to 20 playable characters. Hong Meiling was included again as a playable character after making an appearance in Touhou 7.5, but not in 10.5. The game has a fan-made English translation available for free.

Note: Touhou Hisouten and Soku must be linked, and the latest patch to the game must be applied for all characters to be available. The games can be linked by a relatively painless process in a file in the 12.3 game folder.

Touhou Hisoutensoku plays much like Scarlet Weather Rhapsody with minor user interface changes. The weather system from Scarlet Weather Rhapsody has been ported, mostly unchanged. The single-player portion of the game is arguably the most peculiar element of the game. The game dismisses the classic arcade mode progression almost entirely, giving you only three playable characters to choose from, and modifying fights completely. The enemies faced use spellcards, and do not flinch when attacked. The player must use a careful approach as he dodges bullets, or magic attacks, used by the enemy while slowly chipping away at their spell gauge. When the spell gauge is broken, the player has a chance to attack the enemies directly, at which point the enemies pull themselves back together and use another spellcard. Up to three health bars must be depleted for victory. Likewise, you have three health bars at your disposal, so you may be knocked out three times before losing.

However, most players find the single-player section of the game to be uninteresting, instead opting to focus mostly on the multiplayer aspect, which is where the meat of the game is.

The core mechanics differ some from the standard fare of fighting games. You have a punch button ("Z" on the keyboard), a light bullet button ("X"), a heavy bullet button ("C"), a dash button ("A"), and a switch and use spellcard buttons ("S" and "D" respectively). Bullets can be dodged, or grazed, by being dashed head-on. Physical attacks cannot be grazed, with the exception of when a special weather occurs which changes that rule. The game does not have native support for gamepads.

Spellcards are a common theme in the Touhou universe since the 98-PC games. In this game, you unlock spellcards by playing through the single-player campaign with the main characters. You must play through all the routes in the Lunatic difficulty to unlock all cards. Since this is mostly considered a chore, most players opt to download a special file that already has all the cards unlocked.

The Spellcard system works as following: each card has a rank from one to five. In a deck, you can hold up to 20 cards, and up to 5 cards in your "hand" as you fight. Bigger ranked cards need more cards in your hand before you can use it. After use, all cards in your hand will be gone, so it's a trade-off if you want to wait for a bigger leveled card to appear, or use lower-leveled cards immediately. You get cards by making opponents dodge bullets and take damage.

There are also skillcards from previous games, and system cards which have been introduced in this game. Skillcards are character-specific abilities that modify the manner your character attacks. They are of instantaneous effect and dissapear after being used. Skillcards modify the button combination attacks the characters have. For an example, take Ryu from Street Fighter 2. His half-moon button combo is normally a Hadouken, but after using the shoryuken skillcard, you may find that his half-moon is now a shoryuken. There's a wide array of skillcards in the game, and all of them modify the combinations your characters have, which brings up the opportunities for combos that would normally not be possible with a previous skill. Skills can also be augmented with subsequent skillcard uses, going up to level 5. The level increase, in most cases, shaves off some of the frames from the attack, and also increases the damage dealt.

System cards are new additions to the game. Skillcards alter the way the fights work, with a few exceptions. For example, the Magic Potion system card increases the recovery rate of your spirit orbs, while the Repel system card tosses the opponent across the fighting stage, giving the user some breathing room. Like Skillcards, system cards have immediate effect and will dissapear after being used.

All of these can be edited in a spellcard editor in the profile screen. The game has support for multiple profiles, which can be named, deleted and edited at the user's leisure. One oddity is that while a profile may be created in the profile screen, it can only be changed in the Vs. Network screen. However, that is easily overlooked.

Weathers are brought from Touhou Hisouten, and they also modify how certain aspects of the game works. For example, when the Typhoon weather is triggered, the hitstun for characters is disabled, and they do not finch when attacked. This leads to tense moments as to whether you are confident in your damage-dealing skills and keep hitting the opponent, or choose not to risk it and instead run away until the weather is over. Another example is the Calm weather, which heals the wounds of the attacker who has landed an attack last. Weathers are mostly ignored throughout matches for having mostly harmless effects, with the exception of the ones with more noticeable ones, such as Typhoon and River Myst. There is no way to disable weathers without modifying the game's files.

The multiplayer component works in a client-to-host basis. One person opens a port, and another one connects to his or her IP. It's worth noting that the game might de-sync sometimes, an odd game behavior which causes battlers to fight different instances of themselves. A fighter might still be fighting a character, while the other combatant has already finished the battle. While this does not happen often, there's no way to check when a de-sync has happened, leading to some frustrating moments. Fortunately, battles are usually fast-paced and tend to not last longer than two to four minutes.

For the more enthusiastic fans of the game, a wiki has been made specifically for the fighting games of the series. It cites character and spellcard information with detail, and an extensive list with all the combos possible for all characters of the game. It can be found here.

The wiki also includes patches for the game, such as the official 1.10 patch needed to play online, and the optional English translation. Also included is the score123.dat file, which unlocks all of the fighters and spellcards in the game, kickstarting you into the multiplayer component.

-Four more characters were meant to be introduced to the game, however two of them, Nitori Kawashiro and Wriggle Nightbug, were scrapped due to time constraints. The other two characters, Kaguya Houraisan and Fujiwara no Mokou, were scrapped in favor of a more balanced game, since they were deemed too strong compared to the present roster. Sanae was added on their places, and there is a theory that she was also made weaker for this same purpose. 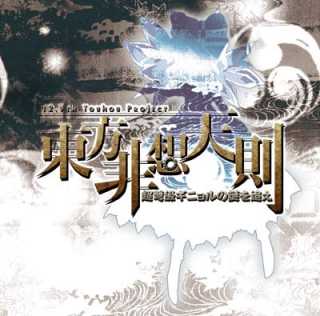