A survival horror game, starring one Fiona Belli who awakens from a car accident to find herself trapped in a strange castle. Aided by her dog, Hewie, she must escape without falling victim to its twisted occupants.
PlayStation 2

Haunting Ground was one of the last classic survival horrors relying on item conservation and fixed camera angles to convey a sense of suspense and terror. It had limited combat and rather relied on the use of hiding and the strategic use of Fiona's dog Hewie. Due to the lack of any powerful attacks the player relied on hiding spots located through out the environments to evade your stalkers much like in Clock Tower 3. This and the ability to give commands to Hewie made up the core game play. Hewie also responded to positive or negative treatment. The better you treated him the more likely it was that he would follow your instructions. If you treated him poorly or gave him bad food, he would ignore or even attack you. There where also multiple herbs and items to help in your mission of escaping the twisted mansion. As with most survival horror games HG had a wide variety of puzzles you had to solve in order to move on. They often required a lot of searching and backtracking to collect items and find clues to move on. It is rather easy to die, and there are dozens of scripted death scenes throughout the game depending on the mistakes Fiona makes. Many of said deaths are actually extremely violent and disturbing, though nearly all of them cut away from Fiona as she is being brutalized.

The main body of the story revolves around Fiona waking up in a strange mansion in rags. She remembers bits and pieces of a car accident, but little else. She soon discovers that the mansion is inhabited by strange characters who all seem to have an interest in her, though none seem particularly friendly. As she explores the mansion, she also meets Hewie who was chained to a tree, freeing him out of compassion. Hewie later shows up to save her from an attack by Debilitas. From then on they are companions, and Fiona goes on to learn of a plot involving her, magic, alchemy, cloning and other supernatural happenings. The characters' interactions, moods and over all design conveyed a deep sense of perversion and depravity. Much of the story was based heavily between the friendship of Hewie and Fiona and this relationship carried the game for it's entirety. In fact, the overall treatment of Hewie was one of the factors that determined the ending you received.

Haunting Ground began its existence at Capcom as "Clock Tower 4," but as development moved on they decided to separate it from the classic series. The game underwent many overhauls throughout it's creation, including replacing a child protagonist and a small terrier, with the teenage Fiona and a white German shepherd. These changes stem from the decision to deviate from the Clock Tower series and move towards a slightly more sexual story and design. The Japanese name of this game is "Demento," which could not be used in the American release for legal reasons.

Released in 2005, it was one of few remaining survival horror games of the era, as games such as Resident Evil 4 and Condemned emerged, introducing a much more action-focussed element to horror games for years to come. The game scored fairly high with fans and reviewers despite its old fashioned ways, but mediocre sales condemned it to a one shot franchise. 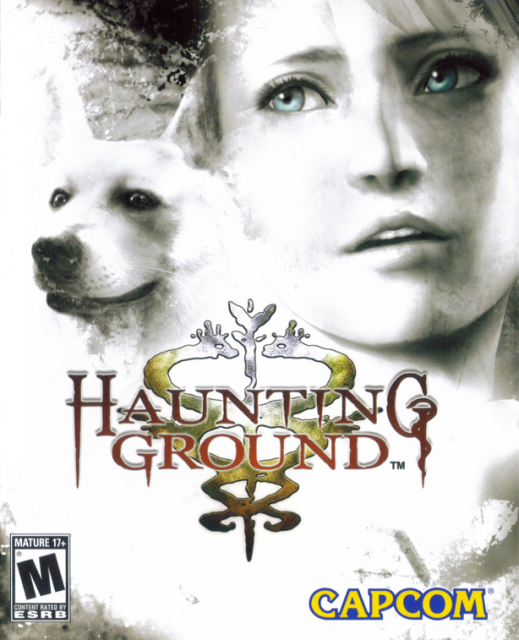