Ar tonelico Qoga: Knell of Ar Ciel is the first game in Gust's RPG series for the PlayStation 3, released in the U.S. on March 15, 2011, and the third game in the series overall. Unlike its sprite-based predecessors, the new game features 3D character models in both exploration and battle.

Some systems return from the earlier games. In Dive sequences, you enter a heroine's psyche, or "Cosmosphere", and undertake visual-novel adventures to gain her trust. You can craft items from recipes found in dungeons. In combat, three vanguard characters fight, while a Reyvateil character performs song magic.

Several new systems were created for At3. With the Purge mechanic, a Reyvateil in battle can progressively disintegrate her costume in order to expose more of her skin to the stars which give her power. The less she is wearing, the more powerful her magic. The battles are now real-time and 3D. In the Cosmosphere, you can collect Hymmnes, which are bits of song magic that you program into a Reyvateil. Each one has an effect on her magic and can dynamically affect the music that plays during battle.
Star Ocean: The Last Hope White Knight Chronicles: International Edition White Knight Chronicles II Atelier Rorona: Alchemist of Arland Eternal Sonata Trinity Universe Record of Agarest War Zero Disgaea 3: Absence of Justice Cross Edge Atelier Totori: The Adventurer of Arland 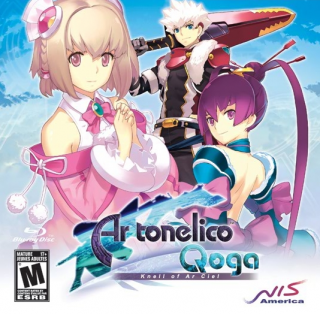