The 2011 entry in the football management sim franchise. It covers the 2010/2011 football season and was released in November 2010

The following features have been announced by Sports Interactive as some of the new features to be found in Football Manager 2011. They promise to announce more features over the coming months. Here are the current ones;

The highlight feature of Football Manager 2011 is the new contract negotiations system. Agents have a bigger role in FM 2011. There are five different types of agents for players, like some who offer a blank slate when it comes to contract negotiations and some who are more sensible and offer a set contract. New contract clauses can now be offered to new players in Football Manager 2011. They include increasing the player's wage after a set number of matches played to if they make it into the "Team of the Year". There are around twelve new contract clauses available in the game to offer to a new player to give him an incentive to join your club.

How the player negotiates the contacts with potential signings in FM 2011 has also changed. Instead of a "Fax" system used in previous games in the franchise, where the manager had to send the new player a contract and you then had to wait a number of in-game days for a reply. Instead, FM 2011 uses a "live negotiation" between the manager, the player and the agent to work out a deal. You can discuss the terms of a new contract to the player and agent. The player will then leave and consider your deal. The player then can take up another team's offer or just accept your own offer.

The new training system seen in Football Manager 2010 is the biggest update to the training system of the franchise. Sports Interactive have streamlined some of the training features and have also added some more depth. There are now 14 specific areas where you can train players in, as opposed to the regular preset catergories This will the manager to train different skills of a player in any way they like.

This allows you, the manager, to train your players in specific formations. It also allows you to focus train your team into one particular area. For example, if you sign a large number of new players, in the summer transfer window, you can try to encourage your squad to try and blend to together for better harmony in the team, whilst you are preparing for upcoming matches. Match Preparation can applied to your team in the week building up to a match. This can allow to prepare to play against a big team by practicing a new formation to use for a more solid defence.

A feature of the earlier Football Manager games was the feature to interact with the players and staff in your club. This has been overhauled in Football Manager 2011. Like the new contracts system, interaction between you and a player now takes place via a live conversation. This allows to have private conversations with your players. This is an effective way for you as the manager to figure out why a player may be unhappy at your club and being able to fixed that through conversation, something that you were unable to do in previous Football Manager games. Football Manager 2011 also includes a number of new options of topics you can discuss with your players and staff. There are also a number of new things you can ask the board about. You, the manager, can now ask to build a new stadium if your current stadium can no longer be increased in size and you can also ask for a higher percentage of revenue from transfers.

In one of the earlier Football Manager games, the news and your personal inbox were split into two different menus to avoid clutter. A subscription was also added to filter what you want in your personal inbox. In Football Manager 2011, the news and the inbox have once again been merged back together. The new screen now has an improved UI to space out the important messages from the simple ones. The actual subscription service has also been re-vamped so the player can more easily manage their news subscriptions. A new module has also been written for news items in Football Manager 2011. It looks at all the possibilities of league places before and after matches and uses these in the news items.

Football Manager 2011's 3D match engine now has new features added to it in order to improve it. There are over 100 new player animations in FM 2010, the ability to play under floodlights in new nightime matches and improvements made to the crowd textures and animations and the stadiums. An emotion engine has also been added to the game. Players on the pitch will now react to events like celebrating when they score a goal, looking sad when the team suffers a heavy defeat and for various other events on the pitch. A new camera angle has been revealed that will be avalible in the game. The new "TV Camera" view will have the camera move in a way that more replicates the camera while watching a match on TV.

Dynamic League Reputation is a new feature in FM 2011. It is a feature which fans of the series have been asking about for a number of years. This will mean that you if take on a club from a less successful nation and you take that club to the top and win a number of different cup competitions, the reputation for the club and the whole league will be raised. This means that over time, better players will want to join your club and better will want to play in your now successful nation.

The revamped version of the Press Conference system in FM 2011 sees 150 new possible questions added to the game. All of the previous 500 press conference questions have been fully reviewed, with possible answers revised where necessary, and are in the game. New questions include things such as questions regarding new signings after they have a played a number of matches. The press conference screen's UI has also been changed from previous versions.

Similar to Football Manager 2010's Tactics Creator, the new Set Piece creator in FM 2011 allows the player to set up set piece routines that can be learned in training and then used in matches, for an advantage on the pitch. It's interface is similar to that of the Tactics Creator.

A number of new options available on the match analysis chalkboard, with offsides, free kicks, corners, throw ins, clear cut chances, half chances all now available to analyse via the system, as well as the option to show match actions for all the players of the team at the same time, rather than having to look at them all separately. There is also a new view for average positions of players during the match and a heat map view showing where they've spent most time on the pitch.

As requested by the FM community, a revamp of B-Team squads is new to FM 2011. They have been changed to more accurately match the Amateur & B-Team squads in real life. This includes the chance for the player to set up their own clubs' B team at the start of the season in appropriate leagues.

New to series in 2011 is the social networking aspect of the game, where players can notify their friends of accomplishments and goals. This includes the ability to send matches recorded in the match engine straight to YouTube for people to see. Via Twitter, players can set manual or automatic updates of achievements to their Twitter account. Steam users can also published the achievements that they have been rewarded with in the game to a personal virtual manager's office on the Football Manager website.

New official licences have to added to the game along with the usual official licences, such as the Football League and La Liga. The new licence for the 2011 version is for the Danish Football League, the Danish Superliga. This means that crests for all of the teams in that league will be featured in the game along with the logos for the league competition. This new licence won't be fully ready at launch, instead it will be patched into the game post-launch.

The demo for Football Manager 2011 was released on Friday, October 22 on Steam. It follows the tradition of other Football Manager demos because it is being released two weeks before the game comes out. The demo allows the player to play a half-season with any club from 12 countries. The player cannot have two saved games from the same country in the demo. The leagues that are playable in the demo are England, Scotland, France, Spain, Portugal, Italy, Norway, Denmark, Sweden, Brazil, Argentina and Chile.

On the release date of Football Manager 2011, Sports Interactive released a patch immediately which addressed issues that came about after creation of the game. It also fixes various technical problems.

The biggest changes include updates to the match engine to help users with lower quality computers, especially laptops, and changed a lot of the finances of various clubs including the Liverpool takeover and non-league finances.

It also adds kits, badges and player faces for many European clubs.

The following countries will be available for the player to manage a team in one of the respective nation's leagues: 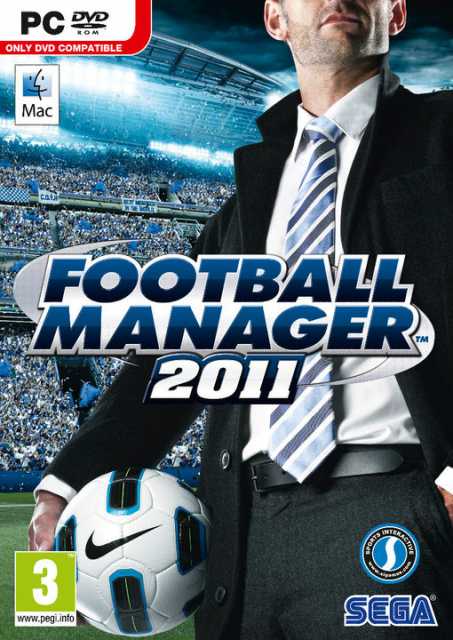