A spiritual successor to Clock Tower developed by the creative minds behind the original Clock Tower, Silent Hill, and the Ju-On films.

NightCry is a point-and-click horror adventure game developed by Nude Maker that was conceived as a spiritual successor to the original Clock Tower, sharing many similarities such as the main antagonist being armed with a giant pair of scissors. The development team for NightCry is comprised of, among others, survival horror game designer Hifumi Kouno (director of Clock Tower), designer Masahiro Ito (designer of Pyramid Head and the Alchemilla nurses), and J-horror filmmaker Takashi Shimizu (director of the Ju-On: The Grudge films).

The title was first announced as Project Scissors and was planned to only be released for iOS devices, Android phones and the PlayStation Vita sometime in 2015. However Nude Maker later launched a successful Kickstarter campaign to create an enhanced PC port of NightCry that featured better lighting and textures among other improvements. Because of the Kickstarter, the PC port became the primary platform for NightCry and was published by Playism on March 29, 2016, with the PlayStation Vita version releasing much later on January 31, 2019.

NightCry is structured similarly to the original Clock Tower series with the game being broken up into two forms of play: puzzle solving and escape sequences. During puzzle sequences the player navigates the environment with one of the game's characters using point-and-click controls. The player can investigate the area, obtain items to solve various puzzles, and talk to other people. The interactions the player has with others characters influences NightCry's branching story and can be a big factor in which of the game's multiple ending will be obtained at the conclusion.

However, while exploring, the player will inevitably run into the NightCry's main antagonist, the Scissorwalker. The Scissorwalker cannot be killed so the only course of action is to run away or hid somewhere in the environment. While in certain hiding spots, a circle with a heart icon will appear on screen and move around. The player must keep their mouse inside the circle in order to keep silent as they wait for the Scissorwalker to leave the area.

NightCry takes place in 2016 aboard a luxury cruise linear called the Oceanus that is traveling from Venezia, Italy to the the Caribbean. The story focuses mainly on two American college students, Monica and Rooney, and their Professor whom are returning from a fieldwork study on the Aegean islands. On their trip through the Atlantic a series of gruesome murders begin occurring on the ship at the hands of a mysterious creature wielding a giant pair of scissors. To make matters worse the Oceanus malfunctions and becomes adrift at sea, leaving all the passengers stranded in the middle of the ocean with a murderous monster on board.

There are four different characters the player controls throughout the course of NightCry. 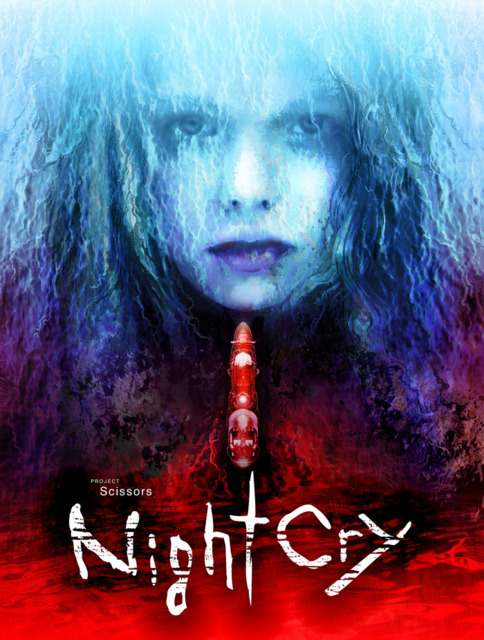