Championship Manager 4 is a football (soccer) managemenet simulation in which a player can take control of his preferred football team and do many fo the things a football manager can do.

New features for Championship Manager 4 included a 2D view for viewing matches. In this view little dots with numbers (representing the players number) would replicate what was happening in the game, the ball was represented by a small yellow dot. Unfortunately this only happened for highlights and not for the whole match length.

Championship Manager 4 boasts over 200,000 players and staff, with a whopping 39 nations taking part. Sports Interactive had a special researcher for each nation.

Feedback was severely overhauled, in Championship Manager 4 not only do the board respond to performance but fans do too, also media speculation has a large part to playw ith newspapers such as The Sun (or popular newspapers in your country) supposedly rumour-mongering about whether you will be staying on at your club or not.

Also In Championship Manager 4 the palyer could now take control of Reserve and Under 19 squads, this however was very unfulfilling due to the often sparse fixture lists of secondary and tertiary teams.

Personality was another large factor in Championship manager 4 with coaches, players and baord staff all having different personalities resulting ina  different  game for each club.

Community had a large part to play in Championship manager 4's success, this is due to it having an enhanced multiplayer function. On top of this, however Championship Manager 4 has a large Modding community, with sites such as  CMfrenzy.com being massively popular at adding new players and leagues. Sports Interactive also supported the game for a long time after relelase, regularly releasing patches and fixes.

At thye time of it's release Championship manager 4 became the fastest selling PC game of all time in the UK, garnering a huge fanbase (which wa slater lost as the franchise descended in quality and Sports Interactive no longer wokred on it). Critically it has a metacritic rating of 92, however that does not even closely represent it's significance as a gaming mecca in the Uk for management simulation. 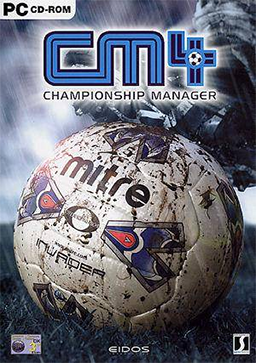