Obscure: The Aftermath, is a horror survival game sequel to the game "Obscure".
PlayStation Portable PlayStation 2

Obscure: The Aftermath is a sequel to the game Obscure. The game picks up two years after the first game left off. The story so far is that two years ago a group of students were locked inside their high school (Leafmore High), while being hunted by monsters that were created by means of biological experiments by their principals Herbert Friedman. A few of the students survived the incident and in the process killed their principal. In the meantime they have finished high school and moved on to college located in a nearby town called Fallcreek. Most of them have tried to forget about the incident, but now strange black flowers are starting to appear on campus. Students start making the flower into tea, or smoke it for a drugging effect. They find out that when the flower is ingested in some ways highly real trips are induced, but which often turn out to be nightmares. But many of the students realize to late that once the plants germinate inside of their bodies, what used to be only a bad trip turns into reality.

Obscure: The Aftermath, plays very similar to other survival games. The player is suddenly placed into a horrifying situation and must fight inexplicably appearing monsters. To do this, the player has to use weapons that can be found on the ground. These often include melee weapons, such as golf clubs or baseball bats but later on also firearms such as pistols or shotguns, as well as power tools such as chainsaws. The enemies in the game range from partially deformed humans, which seem to be in a zombified state, or extremely mutated fictional monsters, as well as mythical creatures such as harpies.

The game is not played in a linear matter, rather than a series of events which are repeated by a group of two different characters at a different point in time. Because the game can be played with two players or with an AI NPC character, there will always be two characters present in each scene who must interact to achieve the current objective. Because of this, different episodes will be played with different pairs of people. That way, the players can experience different events at the same locations. The game features a multiplayer system in which player two can enter or leave the game at any point.

The primary objective in the game is to first of live student life (reunite with people, go to parties, etc.) but suddenly monsters start appearing at these locations. Therefore it is the players job to: investigate what happened, survive by fighting monsters, rescue friends, follow teachers instructions to effectively eliminate the plague. This typically consists of exploring rooms for clues, solving puzzles, finding items, hacking and slashing through monsters and simply surviving. Additionally, the game sometimes requires pre-existing knowledge, so that one of the characters can "hack" into security systems. That way, the player will be faced with a question such as "A famous painter from the 1800's?" and has to input the answer P-I-C-A-S-S-O (meaning, there is no multiple choice answers to choose from).

The game heavily relies on sharing items, meaning that the inventory is collectively for both players, so items have to be distributed into both players quick inventory, in which items are assigned on a certain button. Additionally the game also forces the player to conserve health by making health packs or other healing potions very rare. It can very well happen that the player will reach a part of the game, but will have his or her energy so low that it will be impossible to proceed. In cases like this, the whole game has to be played over again, unless the player has made several saves, which is possible.

The original score for Obscure: the Aftermath was composed by Olivier Deriviere and it's available in its entirety at the composer's official website. 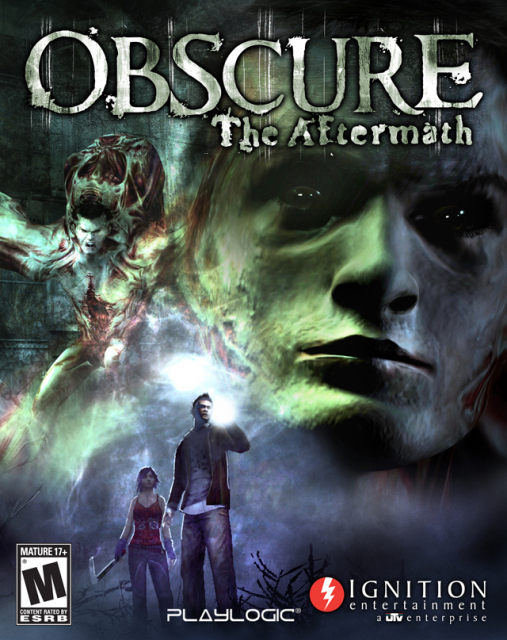