Age of Conan is a massively multiplayer online role playing game set in the Conan lore.

Age of Conan is a fantasy MMORPG that has been developed for the PC (and soon the Xbox 360) by the developer Funcom.

Age of Conan places a large focus on PvP combat, with players having to put in specific combat demands. The PvP extends to other significant gameplay elements such as sieging, a concept where players are able to raid and take over other guild's cities. This concept has not yet been fully polished and the developers believe it is still a "month or two away" from being fully complete. AoC places a significant focus on mature content as the game includes gameplay elements such as Fatalities. Fatalities such as instant death include large amounts of blood being spilt. Players that complete a fatality are rewarded with extra stamina and damage for a small period of time.

AoC takes place in the Hyborian Kingdoms, set a year after Robert E. Howard's 1935 fantasy novel "The Hour of the Dragon". Since then Conan has seized the throne of Aquilonia and must defend it from evil ancient enemies. Future expansions are being planned which will open up the other contents of Howard's world.

Age of Conan received mixed reactions at launch -- mostly poor. As with most MMORPGs at launch, Age of Conan was rife with bugs and many players complained on the official forums that the game was in a practically unplayable state. Over the weeks, however, Funcom hurriedly released patches almost daily, fixing the glaring issues which plagued the game.

In addition to glitches, many key features were omitted at launch and remained absent for a considerable time after. PvP points, which gave AoC players a reason to engage in PvP combat, was absent for over a month, drawing many players interested in Age of Conan's PvP away from the game. Some players also wondered whether armor stats were actually effective after a gear experiment conducted by a player.

Many problems with launch are still being tweaked to this day and, luckily, features which were omitted are now being integrated successfully into the game. Unfortunately, a significant amount of players stopped playing Age of Conan fairly early after launch, and on many forums across the internet the game is shrugged off as a "flop."

On Friday 1st July 2011, Funcom launched a free-to-play service for Age of Conan.  The free-to-play version of the game is known as Age of Conan: Unchained.  There are various restrictions for freemium players such as which classes you can play, which dungeons you can enter and how many character slots you can have amongst others.  Alongside this, they also launched a new in-game store.  Both free and premium players can spend "Funcom" points in this store to purchase various items, mounts etc.  Premium players recieve 60 "Funcom" points on the 1st of every month of their active subscription.

The engine they use in Age of Conan is called "Real Combat" and uses six swings in each direction using a weapon. You can use an attack that hacks down on their head, diagonal swings from top-left to bottom-right, top-right to bottom-left, bottom-left to top-right and bottom-right to top-left and lastly a thrusting attack on the torso. These different swings make you interact with the combat instead of the normal auto-attack. These directional swings are used in combinations  that do more damage, faster combat and cool moves if done correctly. Battles are normally very bloody and interactive with the finishing move looking very good. With each fight you have a chance to do a fatality, like jabbing your sword into their neck with blood gushing out and chopping off their head. It's similar with Rangers and Mages. Mages can use spellweaving which does damage to themselves but a lot of damage to their opponent. Most classes are hybrids which allow them to have fun outside of their normal class. Priests' healing spells are AoE and can do a quite bit of damage, different from the normal MMO Healing class. You can also attack from your mount, unlike other games, which give you stat bonuses and some spells, but most of your normal spells don't work.

Age of Conan is largely focused on "open" PvP where you can attack anyone regardless of class or race. This is in contrast to most modern MMO's that have PVP based on factions or realms. Large scale PVP is based on guild warfare where a limited amount of battlekeeps are fought for. In order to earn the chance of taking over a battlekeep, a guild must consistently win PVP mini-games similar to the Battle Grounds found in WoW. They can then schedule an attack on the battlekeep of their choice. In the event that a guild does not have the manpower to successfully mount an attack or defence, they may recruit other players via a mercenary system in exchange for gold. 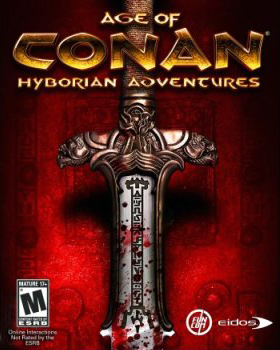